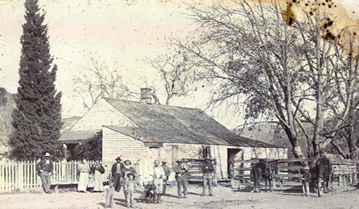 The name Las Cruces is thought to have been   given to the area by the friars when they found two unmarked graves and put crosses on them.  It is also possible that the “crosses” refer to several places where smaller streams join the Gaviota Creek on its way to the ocean.  In any case, the land of the Las Cruces  rancho was originally an 8,888 acre (equivalent to two square leagues) portion of land from the Mexican Land  Grant and part of  the Santa Ynez  Mission.  It was granted in 1837 to Miguel Cordero (1795-1851) by Governor Juan B.  Alvarado.  Cordero was a solider from the Santa Barbara Presidio whose father had been in one of Portola’s expeditions.

Cordero died in 1851 with no will, and the property was in legal turmoil for many years.  The final survey and patent or grant deed was issued to the family in 1883.  This is around when California joined the United States and the titles of many Ranchos were in dispute.  Over a number of years, after much of the testimony and haggling, the Federal Government issued title or ownership with patents.  However the financial need of the family required that the ranch be sold for $2218 on June 28, 1880 and Rancho Las Cruces became part of the Hollister-Dibblee Rancho.  Col. Hollister and the Dibblee brothers continued to purchase Ranches throughout the county and by 1891 owned over 100,000 acres of ranch land, including Ranchos San Juan, Salsipuedes, Espirana, Santa Anita, Gaviota and Las Cruces all collectively know as Rancho San Julian.

In 1833 Miguel Cordero built an adobe on the  rancho, and that adobe still stands today, it is  designated as a historical landmark and is currently covered with sheet iron to protect from further weather damage. The Las Cruces Adobe has been many thing in its colorful career, a stage stop, hotel, saloon, café, stable and blacksmith shop.  It may have even been a house of ill repute during a time when Las Cruces was considered a wild town of wine, women, song and gambling.

Other tenants of the adobe raised sheep, cattle and hay.  When Rancho Las Cruces was part of the Hollister-Dibblee Ranch the adobe was used as a supply house.

The adobe was built on a foundation of two or three rows of field stones and mortar.  The walls of adobe brick were bound with straw and mortar, then covered with a whitewash of four parts water to one part sand and lime.  Doors and windows were out in place as the walls were built, so the adobe bricks could adhere to the wood when they dried.  The   exterior walls were two bricks wide and the interior walls were one brick wide.

The adobe was modified in 1860 to prepare for the stage franchise.  A second partition was placed in the house, creating a bar.  A fireplace was also  added and the interior was wallpapered.  Wooden exterior rooms were completed, as were corrals and a barn.

The local stagecoach station manager in 1866 was Alfred Bascon Williams, who was also a constable , justice of the peace and deputy sheriff.  The station was later managed by R.J. Broughton, who was  appointed postmaster in 1869 and again in 1876.

After leaving Las Cruces, the stage road turned  inland at the Nojoqui ranch, a 13,000 acre spread owned by Romundo Carrillo.  Here they changed horses after the heavy pull over the Las Cruces grade.  The stage then continued on to Santa Ynez and Ballard.