On December 24th, 1932 George J. “GJ” Jedlicka opened G.J. JEDLICKA SADDLERY, INC. at what was then 2605 Hollister Avenue/ U.S. Highway 101.  The store began as a shoe repair shop as GJ was the son of a harness maker and cobbler so shoe repair was a natural fit. GJ originally moved to Long Beach, California from Lynch, Nebraska in the late 1920s. In Long Beach he worked at Buck’s retail shoe store, then moved to Santa Barbara to work for Michael Levy.  When Levy laid him off, he opened his own shoe repair shop, now known as Jedlicka’s. In addition to shoe and leather repairs, he started making high quality handmade boots.

In the 1940’s he began to dabble in the saddlery business, which included custom western saddles with the name G.J.  Jedlicka Saddlery stamped as the makers’ mark.  By 1950 Jedlicka’s had three boot makers, four shoe repairman, and three men in the saddle shop making saddles, chaps, belts, reins, bridles, and all things western.

Word quickly spread about the quality of the fine leather goods Jedlicka was hand-crafting, and soon prominent locals, politicians and well-heeled cowboys proudly wore “Jed’s” leather around the streets and ranches of Santa Barbara County.  In 1946, a junior high school student named Josiah “Si”    Jenkins, at just fourteen, went to work for Jedlicka.  Soon after, the store expanded into western wear, acquiring contracts with top labels such as Levi’s and Stetson Hats.  After graduating from Santa Barbara High School in 1951 and then Woodbury College in Los Angeles, Si served in the armed forces and then he began a full-time career at Jedlicka’s, applying his skills in leather work, business, and customer service.

In 1961 Si married Karen   Ferguson.  They met when she visited Jedlicka’s on a  shopping trip.  Karen was born in Woodland, Ca and as a young girl moved with her family in 1943 to Ojai.  Her father was a ranch manager so Karen was no stranger to the equestrian world.  She grew up learning to ride, brand and round-up cattle.  Si and Karen have two children, Josiah, who now runs the business with his father, and Dorothy, a CPA in Sacramento. 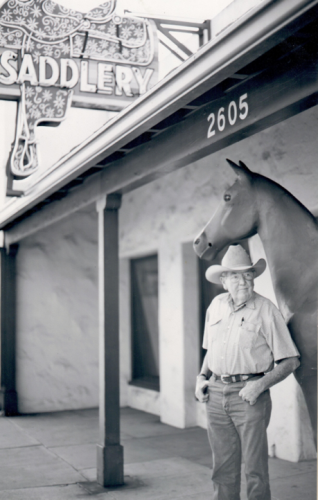 It was 1958 when they also added English saddlery for hunter, jumpers, and polo folks.  They did a lot of manufacturing in those days, but had to succumb to mass production and dropped their custom-made boots for Acme, Justin and Tony Lama. During this time, the saddle shop moved to the back building, at 210 Constance, so the retail store could be  expanded in the main building on De La Vina Street.

In the 1950s the iconic neon saddle sign was purchased and was placed on a pole on the edge of the sidewalk in front of the Santa Barbara location.  For decades it lit up the night with a yellow and white neon saddle and the word “Saddlery” in bright neon green.  The sign rested on the pole for nearly 30 years until City regulations banned neon signage and  required the sign to be removed from the sidewalk, luckily the sign was grandfathered in and Jedlicka’s was allowed to hang it on the front of the building.

Around the time Si and Karen married, Jed had a stroke, and the responsibilities of running the business fell to Si in 1981.  Over the following years, up until the deaths of Jed and Esther in 1990, Si took care of their needs and ran the business.  Upon their deaths, Si acquired complete ownership of Jedlicka’s.

By 1969 Jedlicka’s was incorporated and they became 50/50 partners.  Jedlicka did not have any children, so he began relying on Si more and more as the years went by and giving him more responsibilities in the day to day operations of the store.

In 1978, the Los Olivos location was opened at 2883 Grand Avenue, in what had been an old blacksmith’s shop, a fitting link to the past for the store.  Throughout the years Jedlicka’s and Si in particular have  always followed very simple guidelines, first and  foremost, that you must take good care of your  customers.  The old adage, “the customer is always right” describes his policy.  “If you treat your customers’ right, they will come back.  It is that  simple,”.  Throughout the company’s expansion and increased customer base the Jenkins’ have been heavily involved Santa Barbara activities,   especially in the Fiesta Stock Horse and Rodeo Show.

Si also spent time with his friend Dick May at  Sunset Stables, a former producer of the Stock Horse and Rodeo.  For more than 50 years  Jedlicka’s has supported the show in a variety of ways.  Over that half-century Jenkins has held a wide range of positions with the Stock Horse and Rodeo Show including obtaining sponsors for the show, hiring the judges, procuring awards and just about anything needed to make the event run smoothly.

In 2008 both Si and Karen were selected to be the Honored Vaqueros of the Old Spanish Days Fiesta Stock Horse Show and Rodeo for their long-time support of the event and the equestrian community. In addition to this honor Jenkins has twice been grand marshal of the Fiesta Parade.

When Ronald Reagan was  governor he  appointed Jenkins to the Department of Agriculture, Division of Fairs and Expositions 19th District Board. He served as a board  member for 18 years and was also president for several years, and oversaw Earl Warren Show Grounds.  If it has had anything to do with horses, Si and Jedlicka’s was actively involved, year-in and year-out.   Jedlicka’s, has always been an active participant in other community events as well, such as Old   Spanish Days, and in 2013 Josiah, Si and Karen’s son, served as El Presidente for Fiesta.  Josiah is also the Rodeo Chairman of the Fiesta Stock Horse Show and Rodeo.

Over the years Jedlicka’s added-on to their De La Vina location, increasing their sales floor and their horse services area, but as time ebbs and people’s shopping habits change, with the increasing ease of online shopping it was hard to keep a brick and mortar shop profitable so in 2019 the Santa Barbara retail location was closed.  The iconic neon saddle sign was acquired by The Carriage and Western Art Museum of Santa Barbara and we are currently  restoring the neon and soon it will hang in the  museum so many more generations can appreciate this piece of Santa Barbara history.