History of Nudie Cohn and his Nudie Suits 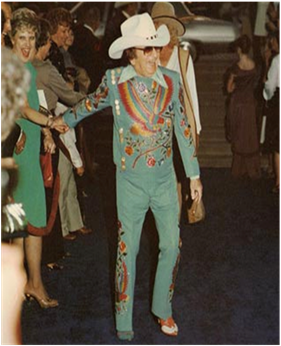 Nuta Kotlyarenko was born in Kiev, Russia in 1902, his father was a bootmaker and his mother raised geese and ran a theater concession stand.  Nuta enjoyed working as a tailor’s apprentice as a young boy, he loved the feel of the fabric and was fascinated by the shapes and colors he could create.  At age 11 he came to live in America with brother Julius.   Entering America and being   processed through Ellis Island his name was mangled into Nudie Cohn. Later he said the agent did him the greatest favor of his life.

As a young man Cohn traveled the country, first working as a shoe shiner and later a boxer.  During his stay in Mankato, Minnesota he met his future wife Bobbie Kruger.  They were   married in 1934 and had only one child, Barbara.  Shortly after her birth they moved to New York City and opened their first clothing store specializing in women’s undergarments.  A 5-foot-7 tailor with an oversized ambition and a love for the limelight, Cohn became a pioneer in making country seem cool.  His life was marked by the western movement, and when he went west, he truly went west. 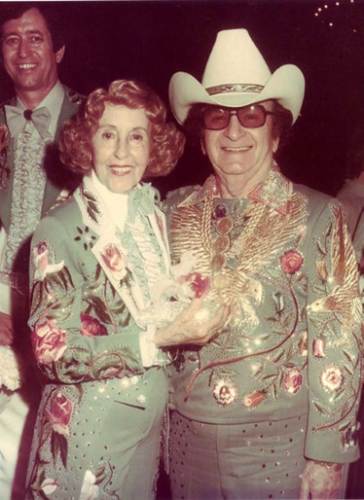 In the mid 40’s Nudie had to have hernia surgery and with no insurance he lost everything.  He was nearly ready to move back to New York but had an idea to try out before he left; make outfits for celebrities.  In 1947 Cohn contacted a young country singer named Tex Williams, who had just left Spade Cooley’s band.  Tex also nearly broke, loved the idea of a custom signature suit so they made a deal to auction off Tex’s horse and use the money to buy a sewing machine.  Nudie was to begin  making outfits for the county   singer.  As their creations gained a following the Cohns opened “Nudie’s of Hollywood” on the corner of Victory and Vineland in North Hollywood.  They would deal exclusively in western wear, a style very much in fashion at the time. Nudie Cohn was well on his way to becoming the original Rhinestone Cowboy.

Cohn’s designs brought the already flamboyant western style to a new   level of garishness with the generous use of  rhinestones and themed images in chain stitch embroidery.  In 1963 the Cohns relocated their business to a larger facility on Lankershim Boulevard in North Hollywood and renamed it “Nudie’s Rodeo Tailors”.

Many of Cohn’s ‘Nudie suit’ designs became  signature looks for their owners.  Among his most famous creations were Elvis Presley‘s $10,000 gold lamé suit and Hank Williams‘ white cowboy suit with musical notations on the sleeves.  He also designed the iconic costume worn by Robert   Redford in the 1979 film Electric Horseman.  Nudie became good friends of many of the music and movie stars he met over the years.  The king and queen of Hollywood cowboys, Roy Rogers and Dale Evans, were two celebrities that became great friends of Cohn and were seen in many Nudie designs.  John Lennon was a customer, as were John Wayne, Gene Autry, George Jones, and Ronald Reagan.  Cohn strutted around town in his own outrageous suits and rhinestone-studded cowboy hats.  His flashy trademark was mismatched boots which he wore, he said, to remember his humble beginnings in the 1930s when he could not afford a matching pair of shoes. 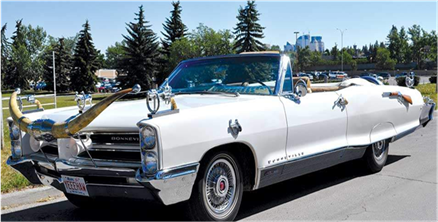 Cohn was equally famous for his overly decorated automobiles. In 1950 his new found success      allowed him to purchase a new white Hudson  convertible.  He thought it would look swell if he  added a set of steer horns to the front.  This was the birth of the Nudie car.  He would end up creating 18 customized vehicles, mostly white Pontiac Bonneville convertibles.  They were nicknamed “Nudie Mobiles“, and the nine surviving cars have become valued collector’s items.  The designs and garishness increased in each successive car.  He added customizations such as six-shooter door handles, rifles affixed to the trunk and fenders, steer horns on the hood, hand-tooled leather saddles placed between the front seats for the young cowpokes and rare silver dollars adorning nearly every surface of the interior.

A Bonneville convertible designed for country singer Webb Pierce is on display at the Country Music Hall of Fame and Museum in Nashville, Tennessee. A Pontiac Grand Ville convertible customized by Nudie can be seen at the end of the 1988 Buck Owens/Dwight Yoakam music video, “The Streets of Bakersfield.”  That same car which Owens’s manager claims was  originally built for Elvis Presley now hangs over the bar  inside Buck Owens’s Crystal Palace in Bakersfield,   California.

Nudie Cohn died in 1984 at the age of 81. Numerous celebrities attended his funeral and the eulogy was  delivered by Dale Evans.  Nudie’s Rodeo Tailors  remained open for an additional ten years under the ownership of Nudie’s widow Bobbie and granddaughter Jamie, but closed in 1994.  On October 1st 2015 in old town Newhall, California Jamie reopened the Nudie’s Rodeo Tailors and Nudie’s Custom Java.  The shop  contains rare historic Nudie memorabilia and a wall of famous photographs that adorned the original shop.  There is also Nudie’s Honky Tonk located in Nashville Tennessee that houses the longest bar in Nashville and is imbedded with 10,000 silver dollars. 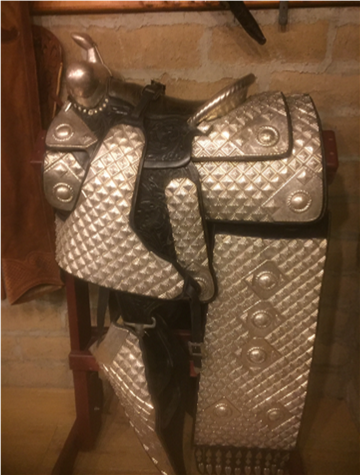 The Carriage Museum is fortunate to have acquired  several Nudie Suits over the years.  We have now on display three complete Nudie suits.  One such suit that is complete with cowboy hat and boots to match was donated by Fritz Grossenbacher along with a beautiful parade saddle on display in a custom display case.  Fritz also donated another complete suit on display in our new Rodeo Tailor display.  His suit joins a custom made suit by Nate Turk for the famous Monte Montana  donated by Joseph Sherwood and Linda Kohn . Please come by The Carriage and Western Art Museum of  Santa Barbara and enjoy these items from a time passed.

Special thanks to Griff Durham, museum consultant, for his contribution to this article.