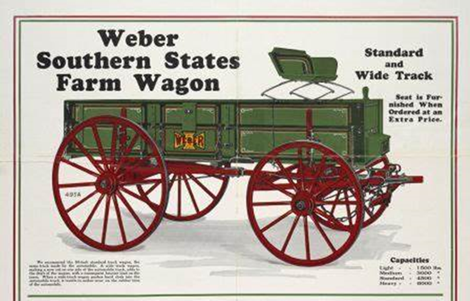 Henry Weber was born in 1822 in Hochweiler, Alsase, France. At the time it was part of  Germany, and thus the family were all German speaking.  Henry came to America in 1841, at the age of 18,  and was indentured to a wagon-maker in Lyons, N.Y. for three years.  After the three years in New York Henry moved to Detroit, Michigan, but the future ‘Motor City’     capital couldn’t hold him and he soon set his eyes on Chicago, Illinois.  Arriving in Chicago midway through 1844, he immediately found work in an   established wagon shop.  By the following year, Weber was working on plans for his own vehicle business.  In 1845 with a modest $250 investment, Henry and his business partner Jacob Gauch, entered into their own wagon making business.

The slow, but steady grind of wagon making in  Chicago was not enough to keep Jacob.  With the news of gold in California, Jacob set off to the   golden state in 1849 in search of riches.  Jacob sold his stake in the wagon business to Henry and thus becoming the sole proprietor of the Weber Wagon Company.

By 1858 the Weber Wagon Company had grown significantly and began expanding it’s operations.   By 1871, Weber had outgrown his original shop and purchased a new four story brick building.  That same year the Great Chicago Fire broke out on October 8th and tore through the city  The fire  destroyed 3.3 square miles over  a two day period leaving 300 dead and displacing over 100,000 people. Fortunately Henry’s shop being built of brick survived the inferno. In 1883, after 38 years in business, Weber fully incorporated his business.  Unfortunately, Weber’s luck didn’t last and in 1887 his shop caught fire and he lost everything except his stock of lumber.

The Weber wagon was considered the Rolls-Royce of farm wagons and over the years grew into the largest producer of farm wagons in the United States.  By the mid-1890’s, the Weber Wagon Company is reported to have been producing 16,000 wagons and bobsleds annually.  With a strong distribution system, they were recognized throughout the United States as a quality and highly desirable brand. Such was the growth that it attracted considerable attention from buyers who wanted to purchase the entire company.  In a move to compete more effectively in the       lucrative wagon market, International Harvester Corporation purchased Weber in 1904 and the   Weber wagon was made up until the late 1930’s.  Henry Weber died in 1907 and is buried in Chicago’s Mount Greenwood cemetery. He left a wife, 2 sons and 3 daughters.

In our collection we are fortunate to have a Weber Grain Wagon painted in the classic Weber green and red scheme.  The wagon was donated to the museum by Ralph and Shelby Hughes, Ralph being a former museum board member.  The wagon is all original and has been used lovingly and is in need of a restoration.  The local Clampers, de la Guerra y Pacheco chapter 1.5, of Santa Barbara have donated their time and skills in restoring the wagon.