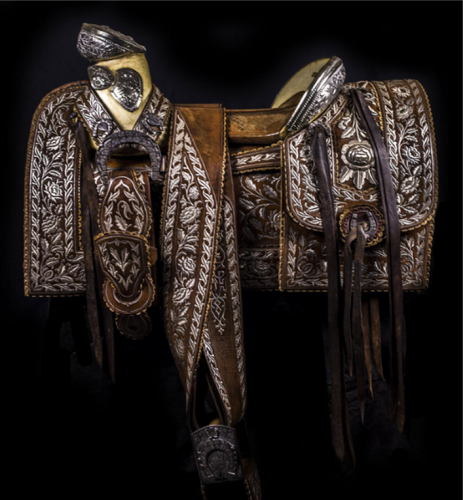 The Mexican Charro Silver Mounted Saddle pictured was assembled  on a custom saddle tree made by Luciano Munguia in Colima, Mexico.  Luciano exhibited his saddle trees at the International Exposition in Rio de Janeiro in 1922-23 and was awarded the distinction of Grand Primo, the very best in the category.  The saddle tree is the foundation of all saddles, in Mexico the trees are classically made from indigenous hardwoods such as mahogany and assembled with animal glue.  Luciano was a master craftsman and his tree became the  foundation for this historically significant saddle.

The Independence Centenary International Exposition was a World Expo held in Rio de Janeiro from September 7, 1922 to March 23, 1923, to celebrate the 100th anniversary of Brazil’s Independence.  The  expo was held during Epitácio Pessoa’s mandate and was  regarded as an opportunity to show off their growing industries and the potential market from Brazil.  The fair was constructed alongside the Rio Branco Avenue in a landed area built just for the occasion.  A total of 14 countries from 3 continents participated in the exposition and over 3 million people attended the event.

Mexico’s attendance at the 1922 world’s fair was the first Mexican participation in an international exhibit after the revolution in 1910.

This saddle maker is unknown but it is  an exact replica of the famous saddle belonging to Ramirez of Guadalajara.  Ramirez was the General of Rurales under President of Mexico, Porfirio  Diaz.  Diaz served as President of Mexico for 31 years, 1877-1880 and again from1884-1911.  The records of Ramirez are scarce but he likely came form the Mexican state, Jalisco, which is where the art of piteado originated.   Guadalajara is the capitol of  Jilasco and the Ramirez name is prominent in the region, the area is steeped in history and is also where Mariachi and Tequila were first introduced to the culture.

The original saddle was adjudged to be the finest charro saddle in all of Mexico.  This replica saddle is done beautifully in tanned light brown leather, the latigos are of soft undressed leather with the horn and back cantle covered with Mexican pressed silver.  The stirrups are inlaid with gold and silver, buckles are steel and formed in a horseshoe pattern.  The saddle is embroidered in silver metallic thread made from cactus and done in piteado art form from Mexico. 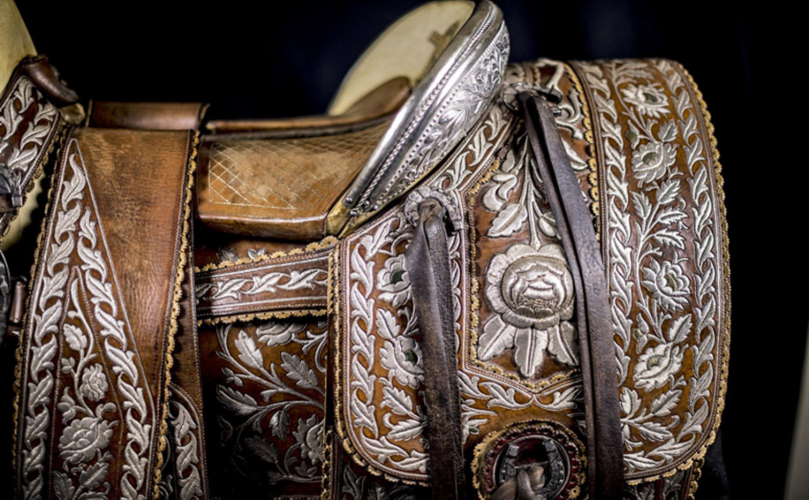 The label seen on the saddle is on the partially  exposed rawhide cantle and identifies the tree maker, Luciano Munguia along with his shop address.  The label also documents an award he received in the Rio de Janeiro expo.  It is common to assume the label identifies the saddle maker, but a label affixed to the tree (or el fuste) is nearly always related to the tree maker, a saddle maker will stamp their mark into the leather not the tree.  The saddle does have some   riding wear on the seat but it is in excellent, original condition.

The picture on the right is a close-up view of the  intricate piteado stitching.  The piteado stich work is a traditional Mexican art craft using cactus fiber, “pita” from many types of plants but most  commonly the Agave and Yucca plant and is  natively referred to as ixtle.  The practice of the art of piteado, which has given the town of Colotlan and the region international fame, dates to the last decade of the 19th Century.  The craft has been passed from father to son through the course of generations.  This Charro saddle is regally adorned with the silver piteado fiber embroidered in elegant and intricate silver patterns appropriate to the time period.  To make silver piteado thread, the pita was wrapped in a fine silver wire and then embroidered into the  leather, a very difficult and time consuming process.  To make a fully embroidered belt can take an  artesian 48 hours of labor.

The term “charro” describes a riding style, the rider and the horse, all the traditions have  been handed down from Mexican cowboys.  The Mexican Charro, are traditional horseman from Mexico and are  similar to a vaquero or ranchero but differ in   clothing, etiquette, culture and tradition.  The Charro come from states such as Jalisco, Colima, Durango, Hidalgo among others.  Today, charro riding is mainly reserved for entertainment during events known as Charreadas.  A popular recognized event in Mexico, the Charreada, which basically translates to rodeo, is an official sporting event that is part of Mexico’s living history.

The Charreada originated with the Spanish  Conquistadors, who introduced bull fighting and riding horses in the new world.  The Indian and Mestizo who worked on the Spanish colonial   plantations added their own unique style and  contribution to the sport.  The Charro riders, dressed in their elegant clothing, riding beautifully crafted parade saddles on amazingly talented   dancing horses can be seen in our annual Old  Spanish Day’s Fiesta Parade.  They have been  featured throughout the Americas for many decades in countless parades preserving and displaying their heritage proudly. 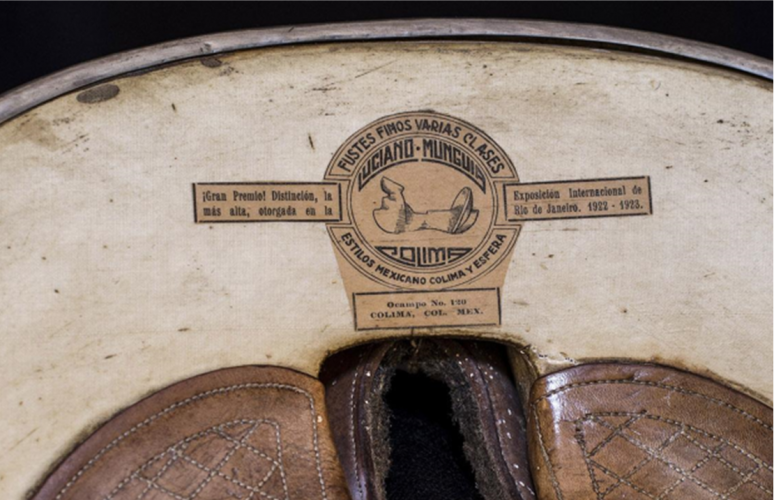 The Ramirez Charro saddle was previously a  cherished family piece in the collection of Silsby Spalding, owner of the Tecolote Ranch in  Winchester Canyon.  This saddle also appeared in the 1937 edition of Country Living Magazine.  Silsby was very proud of the saddle and kept it in a glass case, and members of the family remember cleaning it regularly.  The saddle was donated to The Carriage and Western Art Museum of Santa Barbara by the Pelissero family along with many other beautiful saddles, this saddle is currently on display and a highlight of the Museum’s collection. 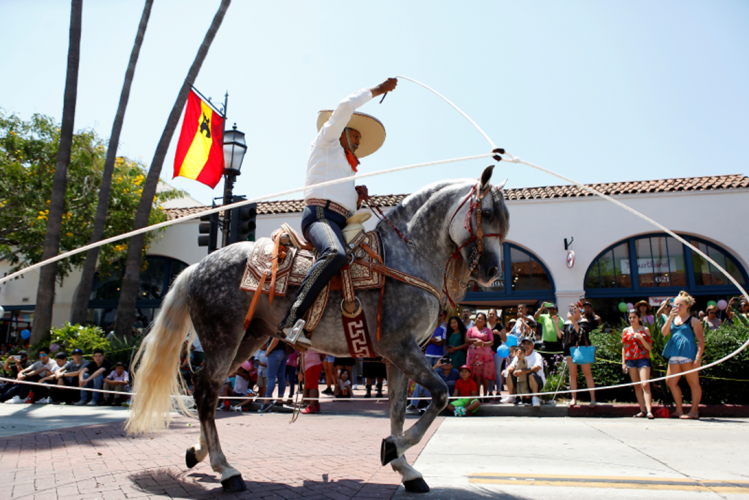 Silsby Spalding was the first Mayor of Beverly Hills (1922-1928) and was great friends with Will Rogers who he appointed honorary mayor Beverly Hills in 1928.  Rogers also served as a goodwill ambassador to Mexico in the late 20s to the early 30s.  The Ramirez replica saddle was a gift from Will to Silsby possibly as a thank you for his     honorary appointment as Mayor but this is not   confirmed.  During his appointment as goodwill ambassador Rogers travelled to Mexico often and this is likely when he acquired the saddle.  Will was also a main stay in our local Fiesta Parade, he was well known for roping young ladies from the crowd and bringing them into the parade.  He was very popular in Santa Barbara and our County Bowl was almost named “Will Rogers Bowl”.  Tragically Will passed away in a plane crash in 1935 at the age of 55.