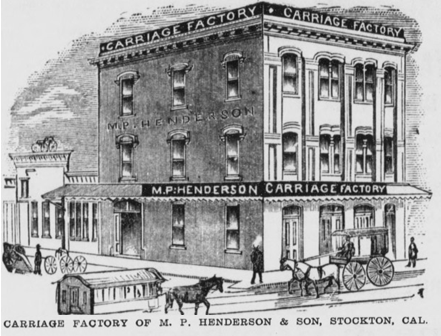 The discovery of gold in California by James Marshall at Sutter’s Mill in 1848 led to a tremendous boon in California. People came from far and wide in search of riches creating a high demand for transportation from local towns to the mountains. It wasn’t only people that required transportation but equipment, food and essentials that needed to be moved great distances through rough terrain. These circumstances created a much needed local industry of wagon and carriage manufactures on the west coast. The Mother Lode was discovered in the early 1850’s, a 120-mile expanse of a rocky gold rich vein, located east of Sacramento in the Sierra Mountains of California. Stockton is located near the deep water channel of the San Joaquin River and it soon became a major supply point for the goldfields. The building of carriages and wagons became an important and thriving industry in the region.

Imported vehicles from the east suffered from the effects of wood shrinkage during the hot dry summer months this caused damage and misalignment of crucial work pieces The added cost of having to ship around the Horn also created a strong demand for locally made vehicles. Wagon and carriage makers began to trickle into Stockton and in 1851 John Fairbanks established the first shop. Just a few months later William P. Miller came to Stockton via Maine and 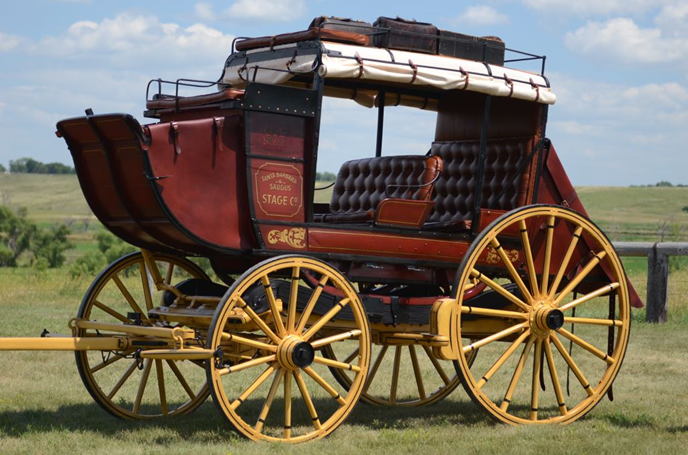 found employment as a blacksmith near the San Joaquin port. After several months of employment he was able to buy the blacksmith shop and started making wagons. By 1855 Miller had built his business to the largest builder of carriages and wagons in Stockton. Milton Pierce Henderson was also a Maine native, born in Lisbon, November of 1834. At the age of four-teen he was apprenticed to a wagon builder and by the age of sixteen he was able to independently build a wagon from the raw material to a finished product. For several years Henderson worked as a journeyman carriage maker in Maine, but like many young men of the eastern states had the urge to travel west in hope to strike it rich at the Mother Lode. In 1859 Henderson took to the sea and made his way west through the Isthmus of  Darian, a heavily jungled area of Panama prior to the construction of the canal. After reaching the west coast of Panama he found his way to San Francisco via the Pacific Mail Steamship Co.

Upon arriving in San Francisco he made his way directly to Stockton and found a job working for Miller as a blacksmith and handyman. Henderson work for Miller until 1861 when he moved to the mining district of San Andreas where he joined his brother in a small business repairing wagons and carriages. 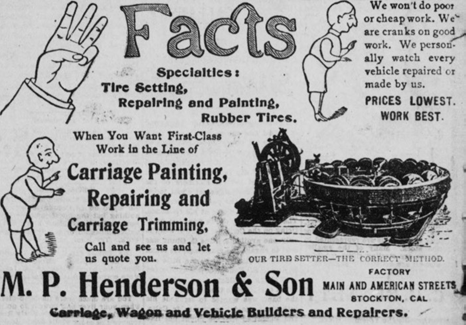 Although Milton never made it to the Mother Lode to mine for gold and riches he did find a treasure in the lovely Anna L. Combs of Stockton and two years after meeting they had a son, Orrin Henderson, who would later become an integral piece of the business. The production of the San Andreas mines began to decline in the mid-1860s and business began to suffer as a consequence. In 1866 Milton Henderson moved his family back to Stockton and took a job with his prior employer, William Miller. After three years Henderson formed a partner-ship with E.G. Clark and entered into a copartner ship under the name of Hender-son & Clark with a capitol of $4000. The business was carried out in a small rented shop with a floor space of 100 x 25 feet located at 292 Weber Ave.

Being industrious and ambitious they turned out the best work and built a healthy reputation throughout the state for their elegance of finish and durability of the work. Business began increasing and in a short time a two-story building was added, almost doubling their work space. Mr. Clark retired from the firm on September 28th, 1874 but Milton continued on in the same location. Milton was highly active in the Stockton community and was elected a city councilman in 1877. In 1878 he was able to purchase property on the northeast corner of Main and American streets and built a three story brick building and basement with the necessary additions for workshops and storerooms. The building was opened Feb 1st, 1879 and to keep up with expanding business he purchased several neighboring lots. Eventually his building housed five forges on the first floor where ten carriage smiths and their apprentices worked.  Seven craftsmen worked in the paint and varnish shops on the second floor along with two trimmers that made cushions and did the leather work. The third floor was reserved for the four woodworkers and storage of gear, including assembled bodies, wheel stock, hickory, ash and other lumber.

On January 2nd, 1885 after working for three years as the book keeper at the age of 21 Orrin Henderson was taken into the firm and by 1889 was full partner and the business became M.P. Henderson & Son. The company enjoyed a stellar reputation throughout the central valley of California and into neighboring states. They were especially noted for the stage wagons of the “mud wagon” type like the wagon pictured here, which is part of our collection at the Carriage and Western Art Museum of Santa Barbara, the origin of the wagon is unknown but we do know it was an original U.S. Mail wagon.

The wagon is a six-passenger mud wagon that was accurately restored to a historical working mud wagon in 2014. We were able to retain an original panel of paint that identified the wagon as a US Mail wagon. In the late 19th century this wagon was used by the Butterfield Overland Mail Company to transport U.S. Mail from Santa Barbara to Saugus and back. They would travel down the coast to Ventura and then head east to Saugus, a rough 90 mile trip that would take two days and several horse changes along the way. The wagon itself weighs about 2000 lbs and needed a six horse team to move efficiently. This wagon has been featured in many of our local Fiesta parades over the years and is one of two Henderson mud wagons we have on display at the museum.

Mud wagons differ from the classic Concord stage coaches as they are lighter and more durable, they cost less to manufacture and lacked doors. Mud wagons true to their name, were able to travel over trails and roads during inclement weather. However, the only protection provided for passengers against bad weather and dusty roads were the canvas side-curtains, which could be rolled down and fastened. The mud wagon became the preferred wagon of the west with M.P. Henderson being the primary manufacturer on the west coast.

This mud wagon is a larger wagon than the Saugus mud wagon but was also made by M.P Henderson & Son. This is a nine passenger mud wagon was restored with a U.S. Mail theme and named the Los Alamos Stage with a Los Olivos to Santa Barbara designation. The wagon was donated to the museum by the Luton Family of Santa Barbara. The wagon had been previously rebuilt and partially restored before it came to the museum. Along with the Saugus wagon, in 2014, the museum was able to raise funds to get a complete restoration and the newly restored wagon was featured in the 2016 Fiesta parade.

During the 1890’s the Henderson’s were given the Stockton representation for the entire line of Studebaker carriages and wagons. The company also had the agency to manufacture other east coast carriage lines but continued to make their own specialty vehicles. Milton passed away in December of 1907 and Orrin continued to run the business for a time but the rapid increase in automobiles eventually caused Orrin to close the doors of the M.P. Henderson & Son Carriage Company in 1910. He worked for the local railroad for some years until he moved to Ukiah, California in 1930 where he lived until his passing in January 1940.