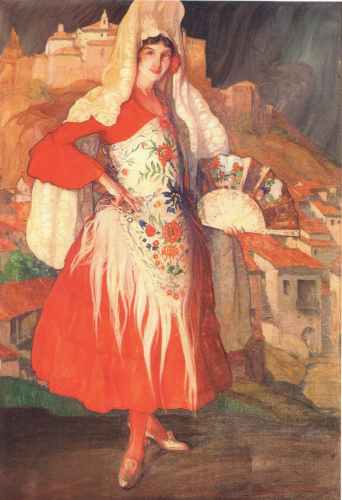 Lutah Maria Riggs (October 31, 1896 – March 8, 1984) was an American architect who worked for several decades in the Southern California region. She was the first licensed female architect in Santa Barbara, and the first    woman in California to be named a Fellow of the American Institute of Architects.

Born in Ohio, Lutah moved to Santa Barbara in 1914 where she completed her undergraduate work at Santa Barbara City College and later received her Bachelors Degree in Architecture at UC Berkley.

The Lobero Theatre was first built by José Lobero on February 22, 1873 and served as the region’s first legitimate theatre. Originally built as an Opera house and for many years the old theatre was the center of social life in Santa Barbara but by the 1920s the theatre was under much disrepair and was in need of a complete restoration.  Mrs. Riggs was the apprentice to local architect George Washington Smith and served as the designer and draftsman for the refurbishment of the Theatre in the 1920s. The Lobero Theatre restoration was completed and opened in August 1924 during the first Old Spanish Days Fiesta and was a focal point of the inaugural Fiesta. The theatre was remade in a time when civic leaders such as Dwight Murphy and Pearl Chase were beginning to unify the town’s architectural identity around the Spanish Colonial style.

June 29th, 1925 Santa Barbara was struck by a 6.3 magnitude earthquake that devastated the historic center of the town and resulted in 13 casualties. This unfortunate disaster allowed the Spanish Colonial vision of Murphy and Chase to become a reality.  The Spanish Colonial Revival architectural style carried into  rebuilding efforts in Downtown Santa Barbara. Before the earthquake, the city’s buildings were mainly designed in the Moorish Revival style. In the end, Santa Barbara got a complete facelift and if the earthquake didn’t happen, we wouldn’t have the beautiful Spanish style homes and businesses that line our streets today.

The Lobero Theatre was not damaged in the quake and the Theatre’s Mediterranean look was a major factor during the rebuilding project.  Smith and others wanted the buildings to have uniformity, and the fact that the Lobero already had a Spanish look, made their decision to rebuild in that specific style even easier.

The painting of Lutah (above) was created by artist  Albert Gilbert Cram (1886-1947).  He was born in Washington DC and studied at The Art Student League in New York City and with artists such as Frank DeHaven, William M. Chase, and Elizabeth Shurtleff.  Cram is well known as a painter of desert scenes and western subjects, as seen in his work of Lutah in her Fiesta dress.  Cram was a member of the Santa Barbara Art League and has works displayed at the San Diego Museum, Stanford University, The Santa Barbara Court House, and The Carriage and Western Art Museum of Santa Barbara.