James M. Forbes, affectionately known as JM, was born on December 13, 1839 in Wooster, Ohio.  His father, Thomas, was a harness maker and in 1860 moved to Mt. Carroll, Illinois with JM and his brother George who was also a trained harness maker.  They built harnesses and saddles until JM enlisted in the 92nd Illinois infantry on August 12th 1862 during the Civil War and was a member G.A.R, then mustering out on June 21st 1865.  After the war, he met Mary Parsons in Rockton, Illinois and was married November 6th 1867 then they left Illinois and first set up shop in Appleton City, Missouri and then making their way to Santa Barbara, California.  Mr. Forbes is first mentioned in an 1883 business directory as the proprietor of a harness and  saddle shop at 737 State Street. In the same block on State were the shop of Sherman Loomis at 714 and JJ Eddleman at 736.  A year after opening his shop at 736 State St., Forbes purchased the J.J. Eddleman shop next door in 1884 and became a large and prosperous business until he sold the shop to William Raffour.  His shop is last advertised in the 1897 directory. During his 15 years in business in Santa Barbara he employed some notable saddlers including the Moreno brothers, Francisco and Jacob, also Herbert Tomlinson who purchased the Loomis shop in 1898. 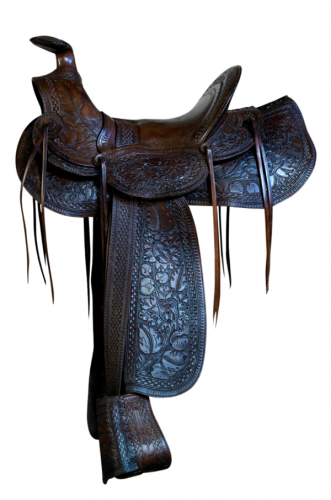 JM Forbes lived in Santa Barbara for 15 years and became a well respected resident and businessman in that time period.  He served on the Santa Barbara Loan and Building Association for 12 years.  JM  passed away at his home on Laguna and Valerio Street in Santa Barbara on October 16, 1900 and the age of 60.

The JM Forbes saddle, upper left, is a beautiful and rare example of his work.  The saddle is a masterfully tooled 1890 parade saddle with long tapaderos fully covered with silver conchos crafted from silver pesos.  The conchos were crafted by John Field, from the second of four generations of Field family silversmiths in Santa Barbara. There are very few Forbes saddles left in existence today.  We have on loan, in our collection, two very fine examples of Forbes’s work.  The parade saddle (upper) is on loan from the Ventura Museum and a beautifully tooled, personalized example, (lower), is on loan from John and Adriene O’Donnell. 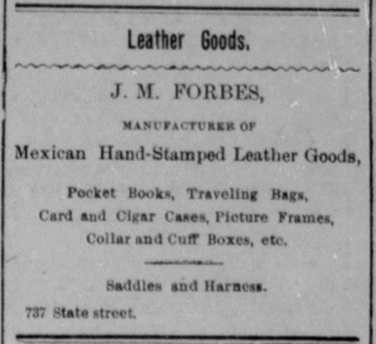