E Clampus Vitus was founded in antiquity, in 4005 B.C. 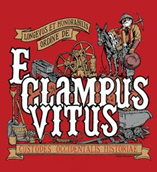 The Ancient and Honorable Order of E Clampus Vitus (ECV) is a   fraternal organization dedicated to the preservation of the heritage of the American West, especially the history of the Mother Lode and gold mining regions of the area. There are chapters in California, Nevada, Arizona, Colorado, Utah, Washington, Idaho, Oregon,  Montana and Outposts in other western states.  Members call themselves “Clampers.” The   organization’s name is in Dog Latin, and has no known meaning; even the spelling is disputed, sometimes appearing as “Clampus,” “Clampsus,” or “Clampsis.” The motto of the Order, Credo Quia Absurdum, credited as the first 3 words of St. Vitus’ 83 volume treatise on man’s relationship to the creator, is generally interpreted as meaning “I believe it because it is absurd;” the proper Latin quotation Credo quia  absurdum est, is from the Christian apologist Tertullian (c. 160–220), who rejected rationalism and accepted a Gospel which addressed itself to the “non-rational levels of   perception.”

ECV also claims Ulysses S. Grant, George Washington, Andrew    Jackson, Ronald Reagan as  members, but claims have also been made to Solomon, Julius Caesar and Augustus Caesar, Henry VIII of England, Sir Francis Drake and His Imperial Majesty Joshua A. Norton, “Emperor of these United States and Protector of Mexico”. These  fanciful claims show ECV’s propensity for not  taking much of anything particularly seriously, least of all itself.  On March 1st, 1983 HRH Queen Elizabeth II was made honorary Clamp Widder by two brave and stalwart future 1.5 Clampers on the occasion of Her Majesty’s visit to Santa Barbara. 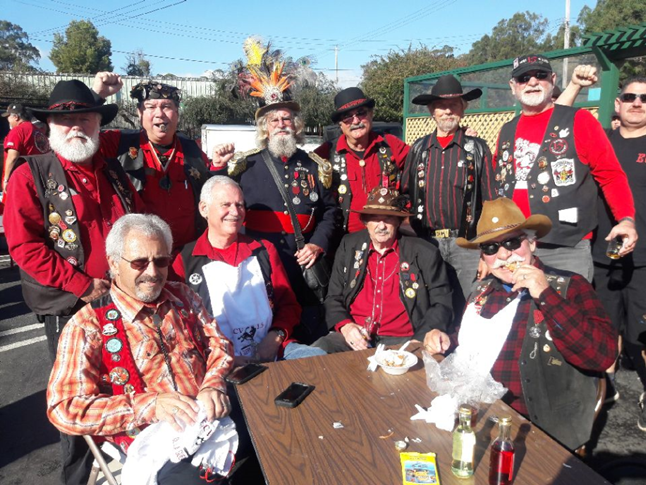 There is evidence to support the ECV claim to Ulysses S. Grant.  One of the early capitals of  California was Benicia. At the close of the War with Mexico, Lt. William Tecumseh Sherman was Adjutant to Col. Richard Barnes Mason at the time of the gold discovery at Sutter’s Mill. Upon     Sherman’s retirement in 1853, his replacement at the Benicia Arsenal was Lt. Ulysses S. Grant, who spent 30 days in the Arsenal Guardhouse for being drunk on duty and firing his cannons at the shore.

Considering Benicia’s position as the major inland Army post and transport hub to the valley, both Grant’s and the Brotherhood’s affinity for strong drink and the early spread of the Brotherhood through Northern California, it is entirely possible that Grant was inducted into the Organization.

The general tradition is that the society had its origin in Virginia, in a mountainous section that broke off during the Civil War and is now West Virginia.  The perpetrator was Ephraim Bee, whose origins are as tangled as those of his organization. He was born in Salem, New Jersey or   Harrison County, Virginia, in 1799 or 1802, depending on whether you consult Hardesty’s Encyclopedia (1885) or The  Boyd K. Stutler scholarly paper “Ephraim Bee and E Clampus Vitus” in the West Virginia Review of August 1931, based in part on an article in the Parkersburg State Journal in 1896.

Bee’s ancestors were ministers and came from a group called Seventh Day Baptists; as the name   indicates, Saturday was their Sabbath Day.  They left Salem, New Jersey and settled in Doddridge County, Virginia, where the Seventh Day Baptists had a college.  Bee lived there for the rest of his life.  Ephraim married Catherine Davis on June 19, 1823, and had ten children with her.  After her death, he married a younger woman, Mary Welch, and had seven more children  seventeen in all. So you can see, right from the beginning he was a real Clamper!

Ephraim Bee worked as a blacksmith throughout his life.  He was also an inn keeper, his tavern was appropriately called the Beehive Inn.  The location was most interesting. George Ezra Dane, one of those who helped revive ECV in 1931, and who was known for his own sense of humor, placed it at Meat House Fork on Middle Island Creek, near the present town of West Union, West Virginia. 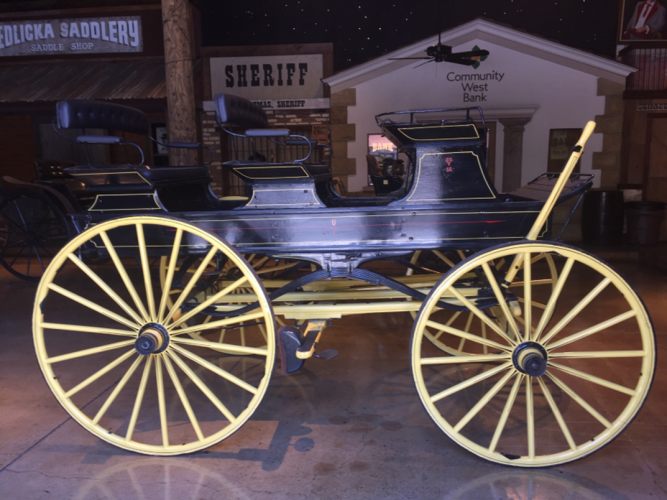 Its isolation did not bar Bee from participating in public affairs.  He had only four months of formal schooling, which most likely qualified him for the West Virginia State Legislature.  He was elected in 1863 and re-elected in 1865 and 1867.

However, Bee is best remembered as the founder of E Clampus Vitus.  He was known throughout the county as a garrulous story teller and practical   joker.  Legend has it, that around 1845, shortly   after American minister Caleb Cushing returned from negotiating a treaty with China, Bee revealed that the Emperor of   China had entrusted him with certain sacred rituals from the East.  Bee then, brought forth the Ancient and Honorable Order of E Clampus Vitus.  A   monument to Bee in West Union now stands on the site of the old “Beehive” Inn along the North Bend Rail-Trail; the original “Bee Hive” was destroyed in a flood in the late 1800s.

One should never overlook the fact that the Clampers were in fact a highly respected and honored organization.  In spite of their well deserved reputation as hard drinking pranksters, there was a benevolent serious side to their activity.  Caring for the “Widows and Orphans” of miners was more than a mere slogan.  Indeed, E Clampus Vitus was by far the largest charitable organization of the time and certainly the only one assisting the families of killed or injured miners. Mining accidents and injuries were  common.  A man killed or injured and unable to work left an almost instantly destitute family. In many cases gifts of money or food mysteriously appeared but the donor was always anonymous. In other instances the  widow, or “widder” as they were known, discovered some unnamed person had made the mortgage or rent payments and saved her and the children from homelessness in a hostile land. Clamper charity was unique in that, with few      exceptions, it was always done anonymously,  quietly and without fanfare although there was  rarely any question as to the benefactor’s true   identity.

The heyday of western mining and the wild life that accompanied it lasted actually less than thirty years before beginning to decline.  Thriving communities saw their population dwindle from thousands to hundreds or less and many were abandoned  altogether.  The dilapidated ruins of these ghost towns stand today as a reminder of an age gone by.  With the decline of mining activity the popularity of E Clampus Vitus also faded until in 1910 there was only one chapter in Marysville, California that was still active.  By 1930 the order was all but extinct and had become just another relic of the past confined to history.

Not long after the order was declared dead and buried, a group of California historians lead by Carl Wheat, George Ezra Dane and Leon O. Whitsell became interested in the many references to Clamper activity found in old newspaper articles and letters.  They also shared a belief that a significant part of California and U.S. history was being lost in the frantic pace of the twentieth century and that historians had become stodgy, dull scholars without humor.  Resurrecting the Order of E Clampus Vitus seemed a proper   vehicle to commemorate and preserve that history and bring about more humor during the Great Depression.  Through their efforts and assistance by Mr. Adam Lee Moore, the last known Noble Grand Humbug of the old Clamper days, the order was revived with the incorporation of a chapter in San Francisco known as Yerba Buena Number 1. The chapter was    christened “Capitulus Redivivus E Clampus Vitus”, or  Revived Capital of E Clampus Vitus, in 1931 and the modern era of Clamperdom had begun.

And, lest they be untrue to their heritage, a liberal dash of the absurd is added for good measure.  In both California and Nevada the Clampers are the largest historical organization. They have erected hundreds of  historical markers and plaques to commemorate significant sites, people and events that played a role in our  western heritage. Many of these plaques are recorded in state and national registries.  Before a plaque is erected the  subject is extensively researched.  The research work often taking a year or more to complete and involves many people spending long hours  digging through libraries, official records, newspaper files and interviewing people.  The work is, of course, voluntary. 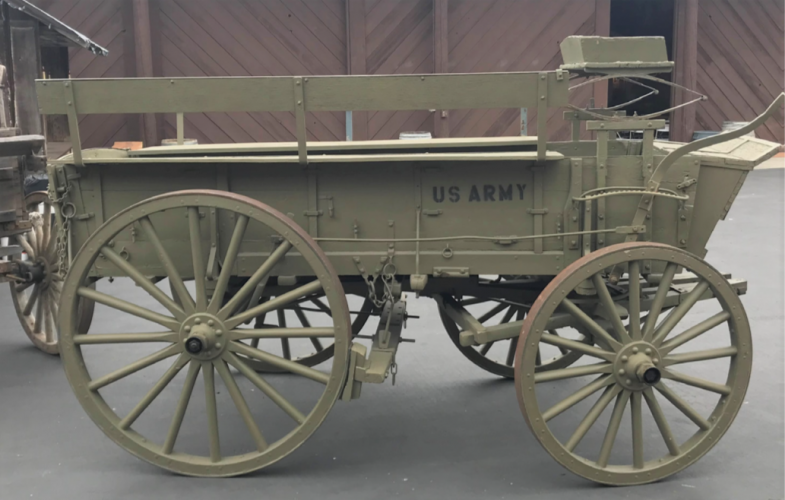 The most glorious   chapter, de la Guerra y Pacheco, Chapter 1.5, reigns over the Santa Barbara and San Luis Obispo Territory.  The chapter is very active in their community, as are all chapters, but Chapter 1.5 is near and dear to the Carriage and Western Art Museum of Santa Barbara.  They have generously given their time to the restoration of three of the museums carriages.  The first two carriages were both  Mountain wagons (one pictured above) they are both beautifully repaired and repainted.  The  current  restoration is of our 1882 International Harvester Co. U.S. Army Supply Wagon.  The wagon was donated to the museum by the Army National Guard in 1974 and the first restoration was done in 1975.  The wagon is currently in need of repair and repaint and the Clampers have taken on the task.  We will be changing the colors back to the original look, with a Dark Laden Blue and Quartermaster Red also adding back the covered wagon top with crossed Calvary  saber artwork.