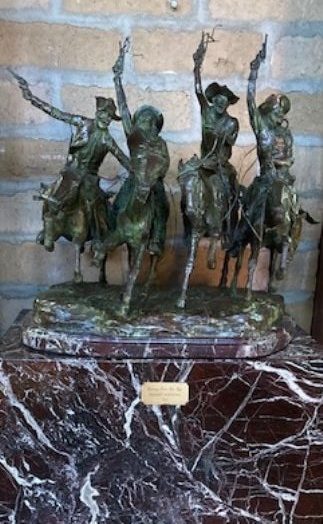 The Frederic Remington bronze statue, “Off the Range (Coming Through the Rye)”, was donated to the museum by Union Bank through our board member Angela Miller-Bevan.  This large bronze statue was created by Remington in 1902 and cast in 1903.  This was the largest and most complex bronze statue he ever made.  This statue is a Cire Perdue casting, or a lost wax cast, the process by which a duplicate metal sculpture, often silver, gold, brass or bronze, is cast from an original sculpture.  Another statue donated by Union Bank to the Carriage and Western Art Museum of Santa Barbara is “American Spirit” by Harold Shelton.  He was an acclaimed American artist known for his oil paintings, but it was Shelton’s bronzes depicting the American West that truly impressed.  This bronze is a very limited edition by The National Heritage Collectors Society now known as Great American Bronze Works, Inc.  This majestic bronze of an American eagle alighting on an oaken branch displaying its great strength and pride is a great example of his work.  Harold operated an art gallery at Carmel by the Sea for many years and was an accomplished sculptor of the Old West and Native American Indians.